Tas-Elmish - Looking for a home on eBay 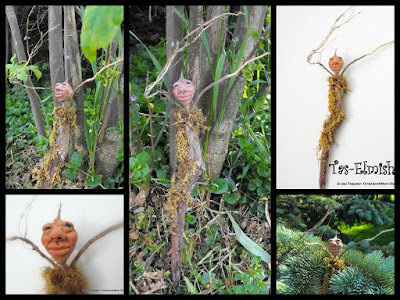 Tas-Elmish is looking for a new home. He's having fun in my garden, but he is kind of looking for a special  garden of his own.  Would you like to welcome Tas into your house? Just pop on over to eBay and place a bid. He's starting out at $25 but you can snag him on a buy it now for $50. Shipping is only $10 for priority (in the US)  Here's the link to the auction  Tas-Elmish Auction
You can always find my auctions by searching for OnceUponAMoonStudio   I hope get a chance to stop by.
Moonbeams & Blessings
Jesi & Mac
Posted by Unknown at 8:05 PM 4 comments:

I have had so much fun doing this challenge. I worked in a new medium for me, needle felting. I really enjoyed learning to work with the wool. I like the feel and texture. I think I'll be exploring more with felting.

I wanted to go a bit darker with my Cheshire Cat. I always thought there was something just a bit sinister lurking behind that smile. So here he is: 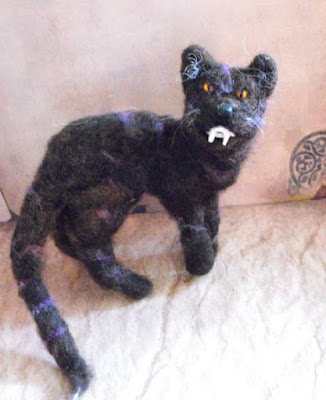 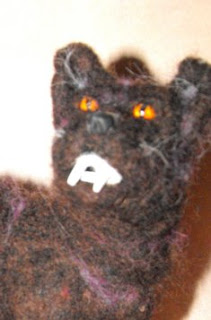 I changed the photos. These are much clearer.

Thanks ADO for letting me join the Tea Party! It's been a blast! I can't wait to play again. :)

Moonbeams & Blessings
Jesi & Mac
Posted by Unknown at 7:20 AM 27 comments: 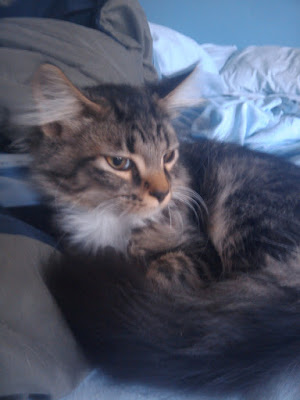 This hansom gentleman is  Sr. T.H. McAnally. I know his name is a bit different, but it's a code version of his Peculiar name. (not to be confused with his Jellicle name which no one knows but him - for an explination visit here: Old Possum's Book of Practical Cats )

Sr, stands for Speed Racer - T.H. is for Tim Horton's, where he was rescued, and McAnally is from the bar in the series of books Jim Butcher, The Dresden Files.

We just call him Mac for short. :)


Mac moved in with us two days ago and has taken over the duties of ridding the house of anything fuzzy, fluffy or misplaced on the floor. He is very diligent about guarding us from evil birds that lurk outside the window too. He is currently making sure that no one steals my recliner, by throwing his body on it and sleeping. :)

He is an absolute doll! (But don't let him here that. It threatens his macho side.)  He was a big brave kitty surviving on his own outside when he was only tiny and barely able to eat. But he has street smarts and a serious swagger, so he got by, even if he was just skin and bones. Then a nice lady named Pam rescued him. She fed him really well and loved him a lot. Then she took him to the vet where he gave up the possibility of passing along his genes, if you know what I mean.

He is showing interest in doll making and has adopted a perch just over my work table where he can supervise.Right now we are working on our entry for the ADO Blog Event - Wonderland. Stop by tomorrow when you can see how we did. :)

I'm sure you'll be hearing from Mac from time to time. He definitely has opinions on most everything.

Once Upon A Moon Studio

Where To Buy My Art

All content is the property of OnceUponAMoon Studio © 2007-2012. Picture Window theme. Theme images by billnoll. Powered by Blogger.