Sorry I've been quiet for so long. I've been so busy getting ready for this show ( my very first) that I couldn't think of anything else.
So here's a look at the set up. I had several new pieces and a few old friends there on display.

"Forever My Love" Made her debut at the show, and found a new home the very same day!

Thanks so much for giving her an amazing new home, Gino and for making me smile!

Goddess Rising also made her debut and found a new home. :)  She's not like my usual pieces, so I was thrilled she got such a great reception.

The show was in Ashbury Hall at  Babeville, a most amazing place restored by the amazing musician, Ani DiFranco.

The day was awesome, with great food from the Whole Hog Truck.  YUMMY BBQ!!!  And awesome music all day long.

I brought home some exquisite tea from Design a Tea.  I'm spending my morning till night sipping liquid delight!  I'm a forever fan!! :)

It's definitely a show to put on your calendar for next year.

But that's enough for the moment... Time to go do something artsy!!!

Come see me at the show!! I'm so excited!
This place is amazing!

Up until now, my work has just been in a few shops.
This is my first real live in person show here in NY.

The studio looks like a hurricane hit it.
( So no photos right now LOL )
I'm going to be bringing some 1:12 scale dolls,
the Crescent Creatures, some root witches
and who knows who else will sneak as I'm packing.

I'm going to have a lot of pieces for $25 and under, as well as some of my larger pieces. So stop by and take a look around.
I love meeting new new friends & catching up with old ones. 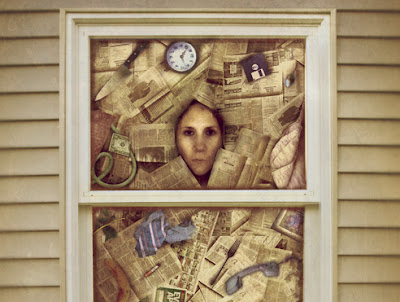 I have entirely too much stuff in my studio!

Time to start purging
Do I REALLY use this?
Will I EVER use this?

Posted by Unknown at 9:14 AM No comments: 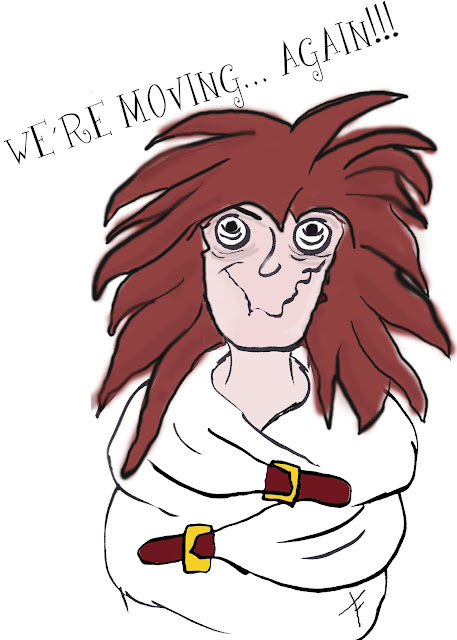 Yep, you heard it here first, folks! We are packing up our goodie bags and moving.

I'm surrounded by boxes and Boxes & MORE BOXES!!!
So if you don't mind, could you send a lil' moving mojo our way? You know, for no rain, strong boxes,easy lifting, etc.   lol I know the Darkling ( who is not Goth.. just dark)  & The Music Man would really appreciate it.

Mac & I are running the show. They are the heavy lifters. *girly grin*

I'll keep you posted on the progress. But until then come find us on facebook and twitter (@Once_Upon_AMoon )

Now There Be Dragons!!!!

There is a new group of beings at Once-Upon-A-Moon.
They are called Crescent Creatures.


Each and every time a TRULY heartfelt wish is made while looking at the moon, a little magic slips down to earth on a moonbeam and a Crescent creature is brought to life.


Crescent Creatures are tiny beings that are born with the sole purpose of helping to make wishes come true. You can tell you have a real Crescent Creature by the crescent moon "tattooed" in moonlight on their tushie!

This is Sprig, the first Crescent Creature.

He is a mini dragon. (Thanks to the urging of Pam Gileda Small ) 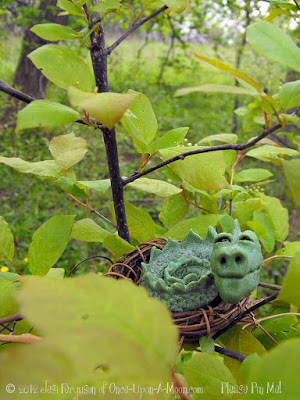 You can find Sprig here in my Etsy store - onceuponamoon

Don't forget, Mac and I love it when you "Pin" our photos, so feel free. 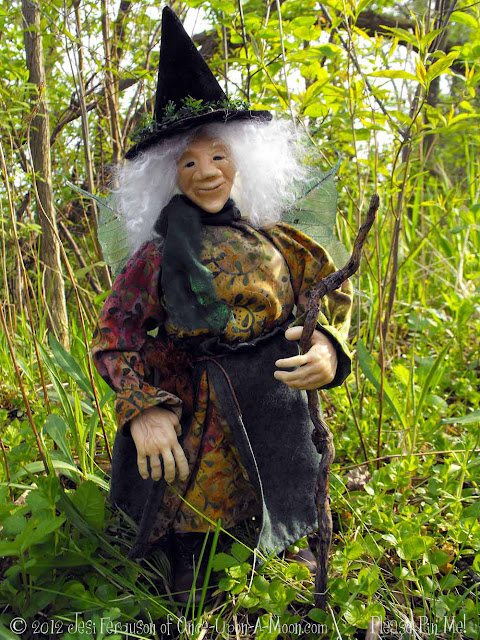 Yesterday, while searching for the perfect place to plant some daisies, I was shocked to hear a rather melodious voice say, “They would look lovely just beyond that bush, Dear. And they would have plenty of sunlight.” I looked around for the person giving advice, but it seemed I was quite alone. Then again the voice sang out, “I’m down hear, Dear, by the stump.” I shifted my gaze towards the base of a fallen tree and there in the grass smiling up at me was a tiny lady. “Silvana Bindweed, Faerie Garden Mother, at your service,” she said with a wink. I smiled and curtsied, for that is what you do when you meet a fairy. “Merry Meet, Silvana Bindweed. I am Jesi…”“Merry Meet, child,” she said with a smile. I know you are. I was hoping to meet you.” “I’m honored, but why would a Faerie Garden Mother be looking for me?” I asked. (Well a girl needs to know why faeries are looking for her. It’s an important thing, seeing as I am the faerie liaison for Once-Upon-A-Moon”“I’m looking for a new garden and I thought you might be able to help. Would you post this on your computer and see if anyone is looking for a Faerie Garden Mother? People are so busy with computers these days they forget there’s magic just waiting for them to believe.” “I’d be happy to, Lady Bindweed.” I said. She thanked me and I hurried into take care of her request. (You can’t keep a Master Faerie Godmother waiting, you know) So here is her resume and some photos. I have also included some extra information that I thought might be helpful in deciding if you would like to give this lovely lady a new home. 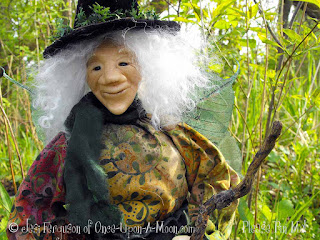 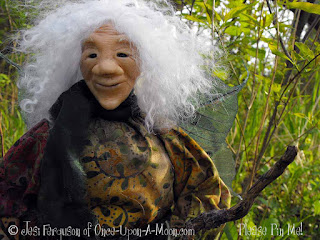 You can find Silvana in my Etsy Store 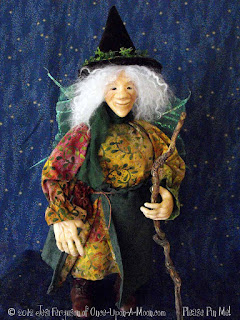 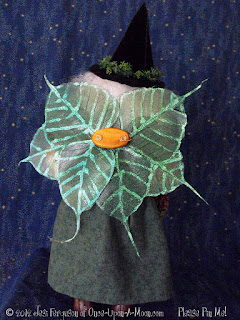 Mother Herb is at it again!

Mother Herb has been added to another treasury.
She is part of the Beautiful In Black Treasury on etsy!
(Even though her dress is dark, dark green.)
We are thrilled that she is in such lovely company. 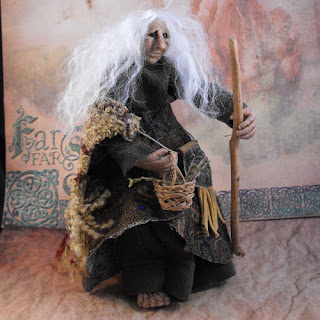 Dash on over to etsy and check out this treasury
featuring the the lovely dolls of Art Dolls Only!

Here's a quick peak at my work in progress.

This one has SHOES!!
(and droopy socks) 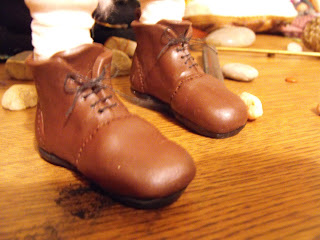 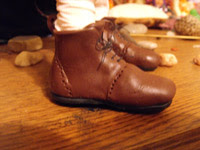 We are in the process of picking out an outfit and doing her hair,
so keep checking in.
I'm going to post peaks as we go.
*grin*
Posted by Unknown at 9:06 PM No comments:

There's hands in the studio!
That means a new doll is on the way! 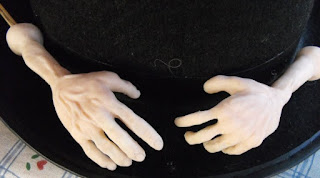 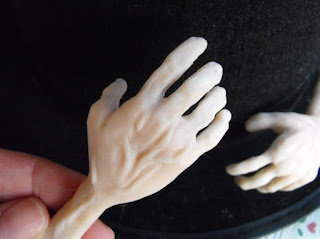 Any guesses as to what he/she/it is?

There's a new witch in town

Windswept has made her debut on Ebay
Won't you stop by and check her out? 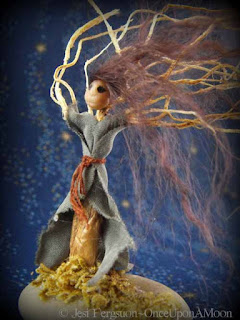 This is where you find her
Posted by Unknown at 12:04 PM 2 comments:

Ok, I know it's normally Sketchbook Sunday, but I've been MIA for a while and I just wanted to share this, my latest adventure with you.

Today when I'm was working in the studio...
(oh! Don't roll your eyes! I HAVE been working... I just haven't been sharing :P)
Anyway...
when I' was in the studio, I had this strange feeling that I was being watched.

At first I thought it might be Mac staring at me from his hiding place under my photo table, but it wasn't, because Mac was sitting on the shelf above my head
playing with a things he shouldn't.  Imagine that. LOL

Then I considered that it might be Mac's arch nemesis. the squirrel, on the back deck.
Nope, not Mr. Squirrel.

I was beginning to get a bit creeped out, when I noticed a rustle in the corner where I keep my roots, twigs and branches.  Unfortunately so did Mac.

He bound down off the shelf and ran head first into the woodpile.
Branches and roots scattered everywhere!

I scooped him up and looked into the mess expecting to find a bug or spider who had hitched a ride into the house on a piece of wood, but instead
I was met with a pair of dark eyes peering out of a hollow piece of wood.
Ah! A visitor! Wonderful!

I smiled and motioned to the tiny one that I would be right back,
and I took Mac to the kitchen and gave him a treat to keep him occupied.
(Can't have him nommin' on the guests!)
Then I rushed back to the studio to say hello.

The tiny visitor was still there, peeking from the hollow.
He looked at me with questioning eyes, then back to the hollow.
Well, I immediately knew what he wanted to know.
He wanted to borrow the hollow for a few days until the snow finished falling.
(There's about 5 inches outside at the moment)

Well of course I was delighted, but I asked if he would do me a kindness in return.
I asked if he would sit for a sketch.
He was a bit shy about it at first, but quickly warmed to the idea when I offered
some cookie crumbs and milk to nibble while I sketched.

I'm not great at sketching, but I do think it captures his likeness.
He didn't give his name, which is normal with the Fae.
Names hold great magick, you see.
So I am simply calling him,
Spore Lil' Guy 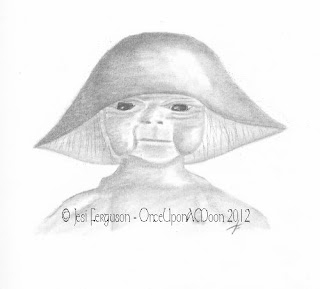 And you never know, he may become the subject of a doll in the near future,
but for now, he's sleeping away in the hollow snuggled down in a milkweed pod.
I'm hoping we can chat some tomorrow, but for now he needs his sleep.

So for the rest of the night, Mac and I are going to curl up on the couch,
much some popcorn and watch wonderfully inspiring movies
filled with fae, magic and happily ever after!

Once Upon A Moon Studio

Where To Buy My Art

All content is the property of OnceUponAMoon Studio © 2007-2012. Picture Window theme. Theme images by billnoll. Powered by Blogger.